Daniel Pantaleo, NYPD Cop who Placed Eric Garner in an Illegal Chokehold Which Caused his Death, is Fired 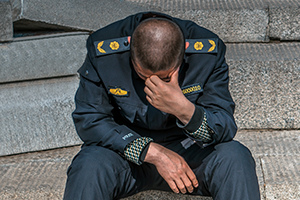 Eric Garner’s dying words, “I can’t breathe” has become a resounding symbol of racial impropriety faced by countless minority communities. On July 17, 2014, Garner, an unarmed African American male, died after Daniel Pantaleo, a New York Police Department Officer, placed him in an illegal chokehold. Garner was approached by law enforcement for the suspected sale of untaxed cigarettes in a Staten Island neighborhood. When Garner initially challenged the arrest, the officers became physical. According to NBC News, four other officers came to assist Pantaleo, as he rammed Garner’s face into the pavement. A video of the fatal incident revealed that the asthmatic father-of-six, claimed he could not breathe eleven times during the ordeal before going into cardiac arrest. The video spawned protests, demonstrations, and civil uproar. Nonetheless, the Justice Department refused to bring civil rights or criminal charges against Pantaleo.

Commissioner James O’Neill fired Pantaleo from the New York Police Department, more than five years after the Staten Island incident. According to the New York Law Journal, his decision to implement Pantaleo’s termination stemmed from the recommendation of an administrative judge, following a department trial earlier this year. Pantaleo had been on desk duty with the New York Police Department following Garner’s death. Commissioner O’Neill verbalized his struggle with the decision by stating, “I served for nearly 34 years as a New York City cop before becoming police commissioner…I can say if I had been in Officer Pantaleo’s situation, I might have made similar mistakes.” Occasionally, O’Neill sympathized with both Garner’s and Pantaleo’s case. O’Neill stated, “Garner shouldn’t have resisted arrest by the officers. But Pantaleo should not have kept his choke hold on Garner once he fell to the ground.” The reactions to Pantaleo’s dismissal have varied. Mayor de Blasio referred to the trial as “fair” and “impartial.” Attorney General Letitia James stated that Pantaleo’s discharge from the police force will incite further activism from her office to reconfigure New York’s criminal justice system. Rev. Al Sharpton, a renowned advocate for racial justice, stated that it should be law that “choke holds by police are punishable with a crime, not just termination.” Nonetheless, Pat Lynch, president of the New York City Police Benevolent Association, called for a vote of “no-confidence” in O’Neill and de Blasio. Lynch claimed that the incident was a “chaotic situation” and that a guilty finding “based on four seconds was absolutely wrong.”