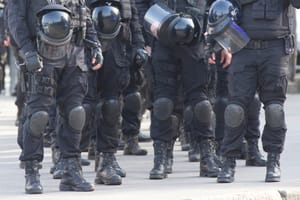 Several incidents have once again highlighted the issue of excessive force and racism amongst cops.

In Indiana an African American Law Professor, Kevin Brown, who was arrested during a traffic stop is filing a Civil Rights Suit, according to the New York Law Journal.

During a traffic stop on a congested highway, Kevin Brown and his wife, Dianne, were handcuffed at gunpoint for allegedly speeding. Mr. Brown, an African-American professor at Indiana University School of Law-Bloomington, stated that he did not initially notice that Police Officer Emily Perkins was trying to pull him over. After driving forty seconds to a safe space, Mr. Brown pulled over away from the incoming traffic. Officer Perkins, who is sanctioned to administrative duty after being filmed pepper-spraying patrons at a local nightclub, allegedly walked up to Mr. Brown’s car with her gun drawn and began screaming, “Why didn’t you stop?!” Fearing for his life, Mr. Brown gave her his driver’s license and bar card to assuage any threatening, pre-conceived notions that she had. Nonetheless, Officer Perkins returned from her car and ordered Mr. Brown and his wife to step out of the vehicle. At this point, two other patrolmen show up to the scene. Then, Officer Perkins handcuffed Mr. Brown. To prevent any surveillance video of the unfolding incident, Perkins threw Mrs. Brown’s phone back into the car and handcuffed her. Mr. Brown was charged with resisting arrest and fleeing a police officer.

Mr. Brown was held for approximately twenty hours before being released. When reflecting about the traffic stop to Law.com, Mr. Brown stated that he believes that his race was the underlying basis of his treatment.

As the longest serving professor of color in Indiana, Mr. Brown is aware of the problems that minorities’ face when interacting with police officers - traffic stops of minority motorists lead to higher percentages of racially-infused violence, and fatalities in America when compared to traffic stops of Caucasian drivers.

Similarly, the death of a black man at the hands of police in California has garnered press attention nationwide including an article in the New York Times.

On October 3, 2018, Chinedu Valentine Okobi, a Morehouse College graduate of Nigerian descent, was killed by taser shocks during an altercation with five police officers in Silicon Valley, California. When a San Mateo County sheriff’s deputy observed Mr. Okobi walking through traffic in a busy area of Millbrae, California, he decided to approach him. According to the sheriff’s office, Mr. Okobi assaulted the deputy upon confrontation. Subsequently, a struggle ensued that led to two deputies firing their tasers, releasing at least four discharges between them. Although the use of a taser is not deemed as “lethal force” in California, Mr. Okobi’s family questioned why the officers’ used any initial force when Mr. Okobi was not conducting or engaging in criminal activity. A witness video captured the latter portion of the police encounter which revealed that Mr. Okobi was being tasered on the ground while shouting, “What did I do?”, but eventually getting away from that part of the scuffle. Tragically, Ebele Okobi, Mr. Okobi’s older sister, fled to London in fear of her children being subjected to fatal encounters with law enforcement in America. Ms. Okobi could not fathom “raising a black son in America” because of the disparaging, racial stereotypes that affects minority groups. As Facebook’s public policy director for Africa, Ms. Okobi has received a lot of support from the social media engine’s executives and colleagues. Facebook has used its connections to spread awareness about Mr. Okobi’s story to various news outlets and civil rights advocates.