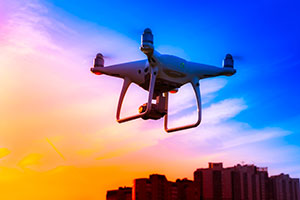 As per the New York Times, the NYPD divulged plans to deploy fourteen drones and train twenty-nine police officers to operate the devices in December of 2018. Since the federal government lightened restircitons on licensing in 2016, the use of drones by police departments has risen exponentially. From pursuit of a suspect by Cleveland police to surveillance of New Year’s Eve celebrations by Las Vegas law enforcement, drones have become a staple in policing technology. This nationwide strategy was developed in part to provide officers with insight on the dangers of crime scenes “before getting into harm’s way.” According to senior police officials, the weaponless drones will be used to investigate dangerous waste spills, supervising hostage situations, and handling crime scenes. Although the drones are prohibited from being used in the enforcement of traffic laws, illegal surveillance, or customary police patrols, civil rights lawyers are not satisfied by the lack of provisions within the drone policy to prevent misuse of the device. Police reform advocates have negatively highlighted the NYPD’s increasing surveillance capacity from license plates readers, cameras in public places, and cellphone data extracting devices.

Alarmingly, the NYPD permits the use of drones for any “public safety” reason, leaving room for a police officer’s unnecessarily broad discretion. Christopher Dunn, the associate legal director of the New York Civil Liberties Union has stated that police officials denounced suggestions that mandate the NYPD to routinely disclose the frequency and purpose of drone usage. Mr. Dunn refused to “bless” the proposed policy because police were not required to use drones under formal guidance. Public defenders are apprehensive of the policy because it may be used to increase racial profiling in African-American and Hispanic neighborhoods subjected to belligerent policing. Joo-Hyun Kang, the director of Communities United for Police Reform, stated that the lack of public oversight in creating the drones program proves “the NYPD disregards the perspectives of communities most impacted by police abuses.” Elected officials have insinuated that video footage from drones may assist the Trump administration in targeting immigrants. Adding to the concerns, is that several police departments implemented drone programs without the blessing of local authorities and purchased the devices with federal funds.

Although the NYPD conferred with elected leaders on a policy for using drones before deployment, there are still unresolved issues with drone usage. Donovan Richards, chairman of the City’s Council Committee on Public Safety, is working on legislation to implement privacy safeguards and require officers to disclose drone usage information. Currently, there is no update to the NYPD drone policy.