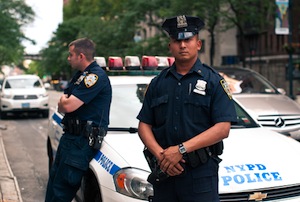 Kevin Desormeau, previously one of the most effective street cops in New York, was spared a custodial sentence by the State Supreme Court in Queens this April, 2018 after being found guilty of perjury. Mr. Desormeau claimed to have personally witnessed a hand-to-hand drug deal in Brooklyn, however security camera footage from a local poolhall later cleared the accused man, Roosevelt McCoy, by proving he was not in the vicinity at the time of the alleged deal. While Justice Aloise criticised Mr Desormeau for undermining public confidence in his fellow NYPD officers and creating doubts as to the veracity of police testimony, he did not address the broader issue of police perjury or “testilying,” which has been illuminated by the New York Times in a number of recent articles.

The Times has uncovered numerous examples of police fabrication of evidence and false testimony which suggest an institutionally ingrained practise of lying on the stand. Another prominent example in addition to that of Detective Desormeau came in February of this year when NYPD detective Michael Foder faced federal perjury charges after being found to have fabricated evidence in a carjacking case. Mr Foder doctored a photo line-up, the principal piece of evidence in the case, in order to persuade a judge that the victim had identified two suspects. However, it was later shown that Detective Foder could not in fact have had access to the photos at the time of the alleged line-up because they had not been taken yet.

While, Detectives Desormeau and Foder were held accountable in court for their duplicity, some have suggested that the NYPD are generally reluctant to investigate and fully discipline dishonest officers. The Civilian Complaints Review Board (CCRB) record and investigate instances of alleged police lying, but have no authority to formally discipline officers. Consequently, when cases are referred back to the NYPD they are often abandoned due to lack of evidence; of the 81 cases tracked by the The Times, on only two occasions were accusations upheld by the Internal Affairs Bureau. Richard Emery, former civilian chair of the CCRB, said that “there simply didn’t appear to be any disciplinary consequences for cases where it seemed black and white that the officer was not telling the truth.”

Another metric by which to measure police perjury used by the New York Times is to look at criminal cases dismissed after a judge deemed police testimony to be non-credible. Troublingly, there are a number of examples where police officers have been promoted after effectively being deemed by judges to be lying. Officer Konrad Zakiewicz was accused by two federal judges of lying in a criminal case in 2013 but was later promoted to detective; similarly, Bronx officer Nector Martinez, was found to be unbelievable in an October 2017 gun-possession trial but later received his gold detective shield. This has led some civil society actors, such as Christopher T. Dunn of the NY Civil Liberties Union to suggest that the police are “wilfully ignoring what appear to be false statements, if not outright lies . . . its intolerable for the Police Department to be doing that . . . [it] just breeds a culture of dishonesty.”

Lawrence Byrne, NYPD Deputy Commissioner for Legal Matters, refuted accusations of an institutional problem. According to Mr. Byrne, inaccurate statements are often “based on faulty memory, not an intentional lie,” and that “if you intentionally make a false statement as a police officer, as opposed to a mistake, you can and will be terminated for that.” This is indeed official policy, and around 70 officers have been dismissed in the last 5 years for perjury or making false statements. NYPD spokesman Peter J. Donald said that Internal Affairs has become more effective and proactive in recent years in an attempt to “root out people who have a problem with the truth.” However, recent revelations by the New York Times appear to suggest that much work is yet to be done.

If you feel that you have been beaten up, falsely arrested, or a victim of brutality at the hands of NYPD or a New York State correction officer or prison-guard, please get in touch with the attorneys at PetersonDelleCave LLP. Call 2122409075.