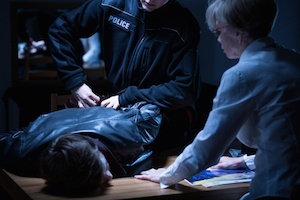 “I’m just another brother with a uniform,” Glen Grays, a 27-year-old black male postal service worker told CBS News. On March 17, 2016, Grays was getting out of his mail truck when an unmarked police car made a sharp turn and almost hit him. Grays yelled at the vehicle, and two plainclothes NYPD officers got out and forcefully arrested Grays. A crowd emerged to capture the incident on their cellphones. Videotaping the NYPD has become a standard practice for the citizens of New York when observing questionable NYPD searches and seizures. Brooklyn Borough President Eric Adams stated during a press conference that this “could have been the next Eric Garner situation.”

Video of Grays’ incident was posted on the Internet and shortly after, it became viral. Mr. Grays was not charged with any crime as a result of the arrest but still received a summons to court. Police Commissioner Bill Bratton stated he was “very concerned” with the NYPD officers’ conduct during the arrest. Luis Machado, the supervising Lieutenant on the scene, was stripped of his gun and badge on March 31, 2016, while the other three officers involved were placed on desk duty.

The Grays incident follows on the heels of another episode of NYPD excessive force exercised on a Postal Service worker. Karim Baker, a 26-year-old postal worker was brutally beaten in uniform by NYPD Detectives while leaving work. On October 21, 2015, NYPD Detectives Angelo Pampena and Robert Carbone approached Mr. Baker while walking to his car after work and requested identification. Mr. Baker then asked why he was being stopped. The reason for the stop? Officers explained, Mr. Baker was parked “too close to a fire hydrant.” Mr. Baker then called 911 for assistance. When Mr. Baker dropped his phone on the ground NYPD Detectives Pampena and Carbone began kicking, punching, and beating Mr. Baker, ultimately leaving him disabled.

Mr. Baker and his attorney say this is the result of Mr. Baker being a target for NYPD since December 20, 2015 after innocently giving directions to Ismaaiyl Brinsley, the man who murdered NYPD Officers Wenjian Liu and Rafael Ramos before committing suicide. Because of Mr. Baker's [peripheral] involvement in the murders, Mr. Baker has been stopped “approximately 20 times over 10 months.”

District Attorney Richard A. Brown filed an indictment against the two NYPD Detectives who beat Baker on April 20, 2016. Pampena and Carbone have been charged with assault, perjury, offering a false instrument for filing in the first degree, and official misconduct. Both Pampena and Carbone have been suspended without pay and, if convicted of a felony, will be fired automatically.

The NYPD now has two investigations of police misconduct involving the arrest of postal workers--federal employees. Law enforcement and federal employees have something in common: both are sworn to abide by the law. As with any industry, not all employees obey their oath; however, the peculiarities surrounding both arrests (which resulted in no charges against the victims and only charges against the NYPD officers) raise questions about NYPD officer’s discretion when administering the law.

If you have been the victim of false arrest or any form of police misconduct, excessive force or false arrest, then you should contact the attorneys at PetersonDelleCave LLP.