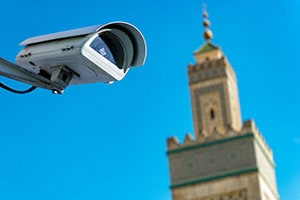 NYPD’s surveillance of constitutionally protected groups based upon racial-profiling has decreased since settlement-mandated reforms, according to a new report published in June. The report, authored by Stephen Robinson, a former judge in the Southern District of New York, also states that the number of investigations requests denied by the so-called Handschu Committee, named after the 1985 case establishing the body, has tripled in the past year. Mr. Robinson was appointed as the new civilian monitor of the Handschu Committee as part of reforms ushered in by civil rights lawsuits brought by members of the Muslim-American community arising from controversial NYPD counter-terrorism surveillance policies under former-mayor Michael Blomberg. Carried out by the now disbanded Demographics Unit, these policies involved extensive video surveillance, eavesdropping, and the infiltration of community groups and mosques. Despite years of broad and open-ended information gathering, the program did not produce a single lead.

In April, members of New Jersey’s Muslim community settled in the action of Hassan v. City of New York, which challenged NYPD snooping over the state line. The law suit alleged that the NYPD’s program was “founded and operate upon a false and constitutionally impermissible premise: that Muslim religious identity is a legitimate criterion for selection of law enforcement surveillance targets, or that it is a legitimate proxy from criminality.” The named plaintiff in the case, Mr. Farhaj Hassan, is an ex-serviceman and New Jersey resident appalled by the extent of police overreach who felt compelled to file suit in order to uphold constitutional principles. Mr. Hassan said “Muslims are as American as anyone else. We have no other home; this is our home…we won this case because our side was in the right - for a better America.”

Hassan was preceded by the settlement in Raza v. City of New York (2017) in which Muslim New Yorkers made the same constitutional claims. As well as the payment of damages to some of the affected plaintiffs, the settlements also built upon a set of policy guidelines first established by Handschu regarding how and when it is permissible for the NYPD to spy on religious, political and social activities. However, Commissioner James O’Neill emphasised that, notwithstanding settlement of these claims, the NYPD did not at any stage admit violations of the law. Rather, in Mr. O’Neill’s opinion, the settlement in Hassan “affirms and enhances the NYPD’s commitment to conducting effective investigations to prevent crime and terrorism. This has occurred while also protecting the constitutional rights and freedoms that every NYPD employee takes as a sworn oath to uphold.” Similarly, Mr. Robinson’s June report was welcomed by Deputy Commissioner John Miller as clear evidence of the NYPD’s commitment to the settlement-mandated guidelines and constitutionally guaranteed civil liberties.

However, Professor Ramzi Kassem of City University of New York (CUNY) School of Law, founder of the Creating Law Enforcement Accountability & Responsibility (CLEAR) Project at CUNY that was co-claimant in the 2017 Raza lawsuit, was less impressed by the report. Professor Kassem pointed out that the average length of each investigation was almost one year, and that investigations still “focus solely on Muslims.” Therefore, in his opinion, “nothing in the report indicates this dramatic over policing of a minority group has ceased or even changed.”

If you feel that you have been beaten up, falsely arrested, or a victim of brutality at the hands of NYPD or a New York State correction officer or prison-guard, please get in touch with the attorneys at PetersonDelleCave LLP. Call 212-240-9075.