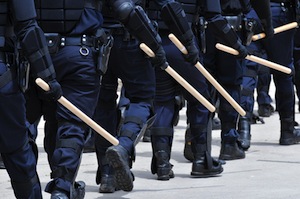 A federal appeals court has recently ordered a new trial in the case of Rasanen v. Brown, 12-680-cv. in which a man was shot dead by New York State Police Trooper Daniel Brown in a case of alleged excessive force, during a search for drugs in his Long Island home on May 17, 2002.

Brown, kitted out with a helmet, face shield and armored vest, along with seven colleges had entered the property with a warrant to search for drugs and drug related proceeds. As they made their way downstairs towards the victims bedroom, where he was asleep with friend Angela Chinnichi, Brown alleged that he had yelled “Police, get down!” before kicking in the door and entering the room. He then testified that Rasanen, dressed in only pajamas, and naked from the waist upward, had charged at him, and after a short struggle in which Brown stated Rasanen had attempted to take hold of his weapon, Brown killed Rasanen with a single shot to his chest. The case was decided unanimously in favor of Brown.

After an appeal by the victim’s father, the appeals court, in a 2-1 ruling disrupted the verdict of the Eastern District jury. The lawsuit was vacated after the appeals court found that the jury instruction on the use of “deadly force” on an unarmed victim, was flawed and necessitated a new trial. Judge Arthur Spatt was deemed to have failed to assist the jury on the limited justifications for the use of deadly force as set out in the U.S Supreme Court’s decision in Tennessee v. Garner, 417 U.S.1 (1985) and adopted by the second circuit in O’Bert v. Vargo, 331 F.3d 29 (2d Cir.2003), leaving the jury confused and unsure how to proceed, ultimately resulting in a flawed verdict.

If you think you may be a victim of police or prosecutorial misconduct, it is important that you speak with an experienced and knowledgeable attorney who can help you fight for the damages you deserve.