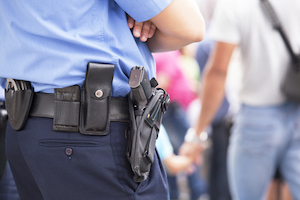 On October 19, 2016, Deborah Danner, a 66-year-old woman with a history of mental illness, was shot dead in the Bronx, New York City, by eight-year veteran, Police Sergeant Hugh Barry, after he responded to a call regarding Ms. Danner’s irrational behavior. It turns out that there had been several similar incidents where Police were called to Ms. Danner’s apartment, but on those occasions the situation was safely deescalated and Ms. Danner was brought to a hospital where she received the care she needed as an emotionally disturbed person. Both Mayor de Blasio and NYPD Commissioner O’Neill have condemned the encounter calling it “tragic and unacceptable.” Both noted that Sergeant Barry was equipped with the non-lethal stun gun, which could have been used to subdue Ms. Danner. Alternatively, an elite Emergency Service Unit of NYPD could have been called.

The issue is NYPD Police Officers’ use of guns instead of using non-lethal alternatives like a Taser or pepper spray. Other recent cases include the shooting of a citizen by an off duty police officer; NYPD Officer Wayne Isaacs was involved in a traffic dispute with another driver, Delrawn Small, who approached the NYPD Officer’s car. A surveillance camera catches Mr. Small recoiling from Officer Isaacs’s car due to gunfire. Mr. Small’s death came in the same week as fatal police shootings in Baton Rouge, La. (Alton B. Sterling) and Falcon Heights, Minn. (Philando Castile who was killed during a traffic stop).

Both the Mayor of New York City and the Police Commissioner have addressed the issue of more training for NYPD Officers in the use of deadly and non-deadly force.

If you or anyone you know has been the victim of excessive or lethal use of force, by NYPD, then please contact the attorneys at PetersonDelleCave LLP.